DON'T BE A CATHOLIC

This write up is not intended to stir up any argument but if it does I don't mind, as far as I know arguments can sometimes prove helpful. It is however aimed at gaining some clarity on the concept of being a Catholic. 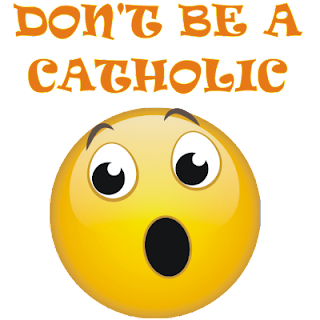 Becoming a Catholic is really easy, you just have to be baptised in the Catholic Church [easier still as an infant]. Where the problem lies is in becoming a practising Catholic now THAT takes a lot of work. To be a practising Catholic it is not enough to just be baptised, you have to be catechised as well; An uncatechised but baptised Catholic is A CATHOLIC nonetheless but not CATHOLIC (If you know what I mean).
This category of Catholics are the ones who will be told that the Catholic Church does not have spirituality and all what nots and they believe! They are the ones who when asked "why do you confess your sins to a human being like you?" begin to wonder why they do! They are the ones who after attending a programme in another church will come back and tell you they've seen the light, what light please?
Now we have another category of Catholics; these are the ones who were born into the Catholic Church and consider it a tradition that is to be passed from generation to generation. This class of Catholics just see it as a trophy that has to be passed down to their offspring and do not want the chain broken because it’s a family thing (and the parents here are die hard o!)
The next category would be the converts who for a variety of reasons just fall in love with the Catholic way of life and choose to be part of it believing it’s the best for them solemn et al. Truth be told, I do not like to invite my protestant friends for Catholic programmes because what we call solemn they call boring and to avoid snide remarks too (I no get strength for plenty talk abeg). I once heard the story of a man who invited his rich protestant friend to mass. During the homily the priest was preaching so slowly and the sermon was so lengthy that people fell asleep; the man was so ashamed that he refused to look in the direction of his rich friend. After the mass as they were leaving the church the rich man turned to his friend and said "I'd like to be a member of your church", the man was taken aback and asked why. The rich man said "when you were sharing the sign of peace I noticed that everyone shook everyone else there was no selection process whatsoever" and that was how he became a Catholic (who would have thought!)
Personally, I think the converts form the better percentage of the last category of Catholics called the practising Catholics. Note that I said they form the better percentage, not the greater percentage reason being that a blind man who just gained his sight would value his eyes/vision more than someone who has been seeing from the day he was born.
Practising Catholics are those who know that we do not just have Ten Commandments but sixteen (when you add the six chief commandments of the church). They know and abide by the Church's precepts, are catechised, understand the Dogma's and know the church has something called the Canon Law.
As a Catholic, you should know and appreciate the gifts you have; ours is a Church of Faith. We honour Mary, Yes! We pray for the dead, Yes! Our (Good News) Bibles has more books – you may like to call it additional books (Try reading them and give reasons as to why they shouldn't be included). We believe in the Saints and that they can intercede for us.
If you want to seek answers in other churches when you have a problem that's fine but I'll tell you one thing; explore all options in the Catholic Church first!
·        Attend Masses
·        Pray the Rosary (always my favourite option)
·        Book Mass
·        Go for Adoration
·        Visit Jesus in the Chapel and have a quiet time with Him
·        Call on the Intercessory Ministry of the Charismatic Renewal.
Any or a combination of these done in faith must yield results (Be patient too!)
I just want to urge you to be a practising Catholic if you really want to be a Catholic; I know it's a herculean task especially with the societies and all. The truth is if you change churches you will very likely join a unit and be a worker there, so why not do it in the Catholic Church?
I'd rather be a Catholic and attend daily Masses to receive the Communion than be a protestant and attend communion service once or twice a year! (topic for another day).


If you cannot be a practising Catholic then please DON'T BE A CATHOLIC.

PS. You may not be a Catholic, you may be one, but I still had to share this post. It is the candid perspective of a friend on this topic. You must have found one or two things to pick from this... Feel free to share here.
PS. I am Catholic. Everyday I tell myself that there is more to just being a Catholic - be a practising Catholic, don't be a Catholic... This topic can never be exhausted not here, I am sure.
[Guest Post by Vivian Ekeada]
Posted by Unknown at 8:00 pm